As France clears “the jungle,” refugees flee to even worse camps 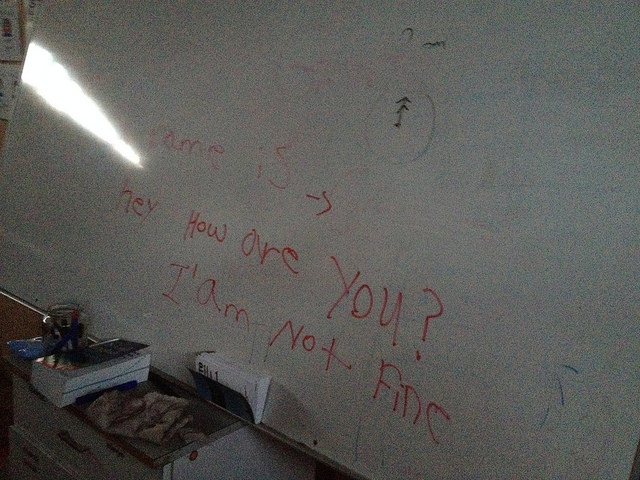 White board from an English classroom, before Calais camp was dismantled. Photo by EngageJoe, published under Creative Commons license.

French authorities cleared a Calais refugee camp called “the jungle” this week — and the refugees displaced from the squalid camp scattered to set up even less secure camps nearby. But what did the French government expect? The refugees in Calais have nowhere to go, and burning down their tents and shacks does not magically create alternatives, but rather increases their misery.

The first French evictions came in January, reported The Intercept:

“The local government intended to reduce the camp’s population from approximately 5,000 to 2,000 by convincing some refugees to apply for asylum in France and others to go back to where they came from, and by making life in the Jungle as uncomfortable as politics would allow.”

In January, as the first bulldozers moved in to level tents and shacks, some refugees moved to a new section of heated shipping containers with beds. But there were not enough beds for all of the again-displaced refugees, and nothing for those displaced by successive waves of bulldozing.

Refugees camped in the Calais “jungle” had no legal status, and the camp was never officially sanctioned. They squatted in the camp, repeatedly trying to cross the Channel to England. According to The Intercept:

“The people who live in the camp fled conflicts in Afghanistan, Syria, Eritrea, Iraq, Iran, Sudan, and other places. Many of them speak English or have relatives in the U.K., or simply believe that England is a place where they can find work and refuge. To apply for asylum there, they must cross the border first, since applications submitted from France are rarely accepted.”

Besides the adults, hundreds of children live in the camp. An NPR reporter talked to a 13-year-old boy:

“In a high-pitched child’s voice — it hasn’t yet changed — Amran tells me his story. His father is dead and his mother wanted him to leave Afghanistan for his own safety. It took him eight months to reach this port city and the Jungle, which French authorities began dismantling this week.“

The unaccompanied, unregistered child from Afghanistan is one of many: according to NPR, “Sweden and Germany — where most unaccompanied minors have headed — registered 95,000 last year alone.”

As they are driven out of the “jungle,” Calais’s refugees regroup in smaller, even less organized camps nearby. Al Jazeera reported “scores of refugees, mainly Eritrean and Sudanese, crammed into tents in a woodland area off a narrow country road.” Medecins Sans Frontieres (Doctors Without Borders) opened a new refugee camp near Dunkirk, housing more than a thousand refugees, according to BBC, but the organization said it feared that the French government would try to close this camp, too.

News Day, written by Mary Turck, analyzes, summarizes, links to, and comments on reports from news media around the world, with particular attention to immigration, education, and journalism. Fragments, also written by Mary Turck, has fiction, poetry and some creative non-fiction. Mary Turck edited TC Daily Planet, www.tcdailyplanet.net, from 2007-2014, and edited the award-winning Connection to the Americas and AMERICAS.ORG, in its pre-2008 version. She is also a recovering attorney and the author of many books for young people (and a few for adults), mostly focusing on historical and social issues.
View all posts by Mary Turck →
This entry was posted in Children, Europe, Refugees and tagged "the jungle", Calais refugee camp, France, Refugees. Bookmark the permalink.

1 Response to As France clears “the jungle,” refugees flee to even worse camps