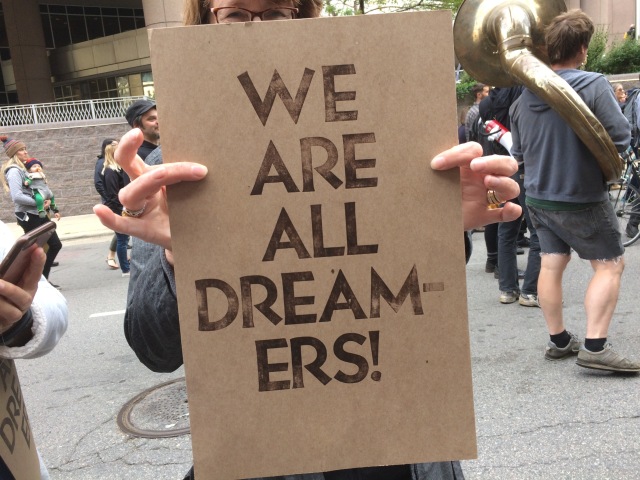 ln a 5-4 decision, the U.S. Supreme Court today dealt a major blow to the Trump administration, reversing the administration’s attempt to end Deferred Action for Childhood Arrivals (DACA). Chief Justice John Roberts wrote the majority opinion, which leads off the complex 74-page array of concurrences and dissents. Click here to read the pdf of the opinion, if you are so inclined.

After years of organizing by and for Dreamers, DACA was created on June 15, 2012, by President Barack Obama. “Dreamers” are undocumented immigrants who entered the United States at a young age and have grown up here. In every sense that counts—except for visas—this is their home.

The DACA program deferred deportation proceedings for two years for undocumented young people who could prove that they met a long list of qualifications. They had to pay a $495 fee to apply, and then another $495 every two years to renew their DACA status. They had to show that they:

In 2017, the Trump administration tried to end DACA, setting off a wave of lawsuits. The courts ordered that DACA recipients be allowed to renew their status while the lawsuits wended their through the system. Today’s Supreme Court decision basically rescinds the Trump administration rescission, but it does not guarantee a future for DACA recipients.

The Supreme Court said the Trump administration acted improperly in the way that it terminated DACA, but left open the door to a “proper” attempt to close down the program.

Nobody knows the mind of Trump, so nobody knows whether he will try again. The argument against trying is that the Dreamers have overwhelming support from both Democrats and Republicans in every single poll.

Even DACA, however, gives no path to a green card (legal permanent residence) or to citizenship. It’s just a two-year-by-two-year half-way protection.

For a real solution, Congress needs to act. And it can. The House of Representatives has already passed the Dream and Promise Act. Now the Senate needs to act—and a majority would probably vote for the bill, but Mitch McConnell refuses to allow it to come up for a vote.

If you’d like more information, the Immigrant Law Center of Minnesota has lots of it: