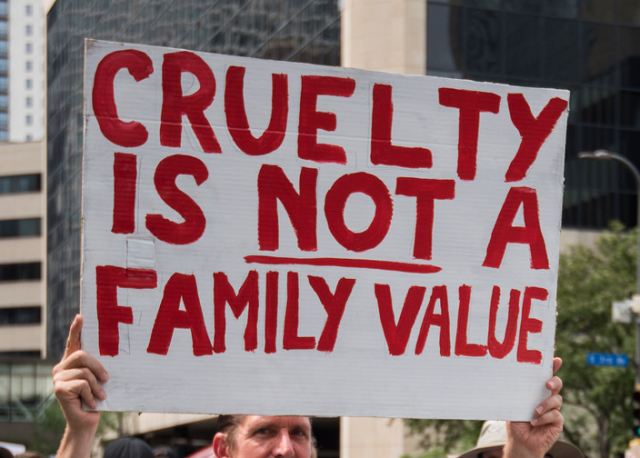 From photo by Fibonacci Blue, published under Creative Commons license.

“The girls, 8 and 11, were alone in a rented room in a dangerous Mexican city bordering Texas. Their father had been attacked and abandoned on the side of a road and they didn’t know where he was.

“For seven months the children had waited with their dad in Matamoros, across from Brownsville, to ask U.S. authorities for asylum. They had fled their home after death threats from local gang members and no help from police. They had also been victims of sexual assault.

“But in March, after their father suddenly didn’t return from his construction job, a neighbor took the children to the international bridge. He said they should present themselves to U.S. immigration authorities, who would reunite the girls with their mother in Houston.”

After emergency court filings, their deportation was suspended—for the moment.

A 16-year-old Guatemalan girl was not so lucky.

“The 16-year-old girl sat alone in the hotel room, under guard, unable to leave, unable to call anyone. She didn’t know where she was, or even what state she was in; all she knew was that she was going to be deported in a few hours to Guatemala, the country she’d fled….

“On Saturday, when her lawyers were finally able to locate and reach her, she couldn’t tell them where she was, and security wouldn’t provide the name of the hotel, Soliman said.

“’This child has been moved from city to city and hotel to hotel,’ Soliman said. ‘And each time has resulted in communication being completely cut off with her legal counsel.’

“Under the cover of the coronavirus, Trump officials are targeting unaccompanied migrant minors for deportation even as lawyers fight to force their release to relatives in the U.S. who’ve applied to sponsor them, advocates across the country say….

“Monday afternoon, a plane of eight unaccompanied minors, including the teenage girl, left San Antonio and arrived in the Guatemalan capital, officials there confirmed.”

In Harlingen, New York, Pittsburgh, Houston, across the country, ICE is fast-tracking deportation of unaccompanied children who have, at some point in their short lives, received a deportation order. ICE insists that immediate deportation is necessary to protect the country from these children, who may have contracted COVID-19—while held in detention. Catch 22, anyone?

Lawyers say the Office of Refugee Resettlement, which is charged with housing and protecting minors, is cooperating with ICE to get them deported.

“Across the country, however, lawyers who represent migrant kids say the administration is refusing to release children to ready sponsors. Court documents and lawmakers back them up.

“Trump administration attorneys have argued in court that children are safer from COVID-19 in custody — even as the government quietly ramps up efforts to deport them. In recent weeks, officials have pulled scores of children and parents from detention in secretive operations to remove them from the U.S., according to lawyers, migrants’ affidavits and the receiving countries. Some were sick. A number were challenging administration policies in court.”

Other children, waiting for their day in court, are held in detention with their parents. Judges have tried to protect children and families held in detention. They have limited the number of days that children can be detained. Instead of complying with court orders, ICE is trying to get parents’ permission to separate the families. What ICE is not telling them: separation would make it easier to deport parents.

“Lawyers representing clients at the three family detention facilities originally … said ICE agents had approached detained parents, presenting them with a ‘binary choice.’ They could either authorize their child’s release, resulting in their separation from them, or the families could stay in prolonged detention together.

“The immigration attorneys, who belong to pro bono legal service providers RAICES, ALDEA and Proyecto Dilley, said ICE had not notified them in advance that it would present parents with such a choice. The lawyers said the parents recounted that ICE agents did not provide other options and did not clarify whether or not parents would be deported without their children, some of whom were as young as 1 year old. …

“Herre and other lawyers said they believe ICE timed its recent actions so the agency could tell the U.S. court it complied with court orders. They sent a letter last week to the independent monitor for the Flores settlement agreement, noting that 163 children held at the three family detention facilities were detained for an average of 137 days; 58 were detained for more than 200 days.”

I’d like to end this post with a solution, or a call for action, but I don’t have anything. I only know that we must not look away. We must not ignore these suffering families and children.