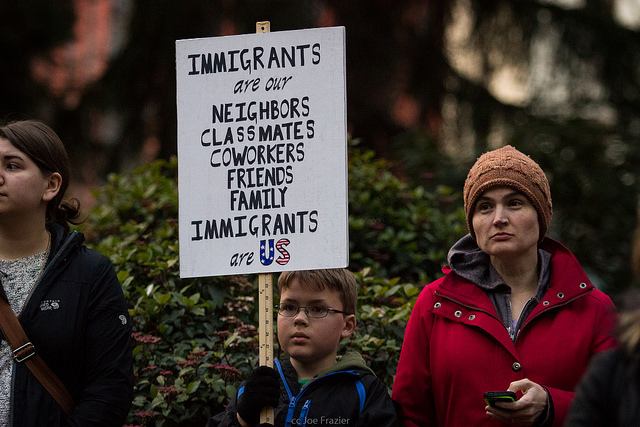 Not content with sending asylum seekers back to danger and kidnapping, rounding up Mississippi poultry workers and separating them from their children, and posturing about border walls, the Trump administration today announced further moves against legal immigrants, effective October 15, in the so-called public charge rule.

U.S. officials abroad have been using this rule for months, upping the “public charge” denial rate for visa applicants from Mexico from seven during all of fiscal year 2016 to more than 5,000 in the first ten months of the current fiscal year. Worldwide, the number of “public charge” visa denials escalated from 1,033 in FY 2016 to 12,179 in the first ten months of FY 2019.

The increase in “public charge” denials comes in spite of all evidence showing that immigrants use public benefits less often and for shorter periods of time than native-born U.S. citizens. Temporary visitors (tourist, students, etc.) are not eligible for any public benefits and most legal permanent residents are not eligible until they have lived in the United States for five years. But  hey—why bother basing public policy on facts?

The “public charge” provision of U.S. immigration law dates back to the Chinese Exclusion Act of the 19th century. In the past, it has meant that a prospective immigrant could be denied entry if they were likely to be or become primarily dependent on public benefits for their support. “Public benefits” meant cash benefits, like TANF payments, but did not include non-cash benefits, such as food stamps or medical assistance. If you were a legal permanent resident or U.S. citizen applying for a visa for your spouse or your parent, you might be asked to sign an affidavit of support, saying that you would support them if they were not able to support themselves.

The new rule changes all that. Now non-cash benefits count, but that’s only the beginning. Health, wealth, age, employability, English language skills, education level: all these will count as weighted factors. The weight given to each factor? That’s a mystery.

Say you are applying for a green card as the spouse of a U.S. citizen or legal permanent resident. Do you have less than a high school diploma? That’s one strike against you. Do you speak, read, and write English? No? Another strike. What’s the state of your health? Of your bank account? How much money does your spouse earn? What is the state of your spouse’s health? Has your spouse ever used medical assistance, subsidized housing, or food stamps? How many strikes do you get before you are counted out?

That last question is the real kicker: no one knows. Approval or denial is up to the individual discretion of the officer considering the application. When the policy of the administration is to reduce all immigration, it’s easy to predict which way that discretion will go.

The new public charge rule affects millions of people. The Department of Homeland Security estimates that more than 380,000 immigrants already inside the United States could be scrutinized each year as they apply for green cards. Those applying from outside the United States add more than half a million every year to the number.

Family members who have their own green cards but are sponsoring a mother or father, husband or wife, also have to worry about whether their own use of public benefits will carry weight in the visa application.

Many of the 26 million legal immigrants already living in the United States suffer from the chilling effect of the rule. Since it was proposed, one in seven adults in immigrant families has withdrawn from or decided not to apply for public benefits for which they or their children are eligible. For low-income immigrant families, the number is one in five. Even naturalized U.S. citizens responded to the chilling effect of the proposed rule.

The rule is 873 pages long. No one knows exactly how it will be applied or interpreted.

While the rule is complicated, some programs—like medical insurance for children or school lunches—definitely are not covered. (If you are an immigrant worried about how or whether the rule applies to you, seek legal advice.)

Fear seems like an intended response to the rule.  Maria’s story, reported in the New York Times, shows how it works:

“The fear touched off by the new rule is illustrated by Maria, a 28-year-old woman from Colombia who is five months pregnant with a baby girl and reached out to her lawyer for advice a couple of weeks ago after she started seeing coverage of the draft version of the public charge rule in the news. Her husband, a childhood friend from Colombia, is a United States citizen, and she is in the United States on a tourist visa while she applies for a green card with him as a sponsor.

“Maria’s husband, a high school teacher, had been off work during the summer break, forcing them to enroll in supplemental nutritional program for women, infants and children, known as WIC, in order to afford food and prenatal care. Though the new rule specifically does not penalize pregnant women for seeking such assistance, she said she fears that it could be used against her anyway.”

This administration’s immigration policy is based on terrorizing immigrants.  Watch for the next step: the goon squad operating out of the White House has already promised to extend the public charge rule to apply to citizenship applications.