Living in Fear in the United States 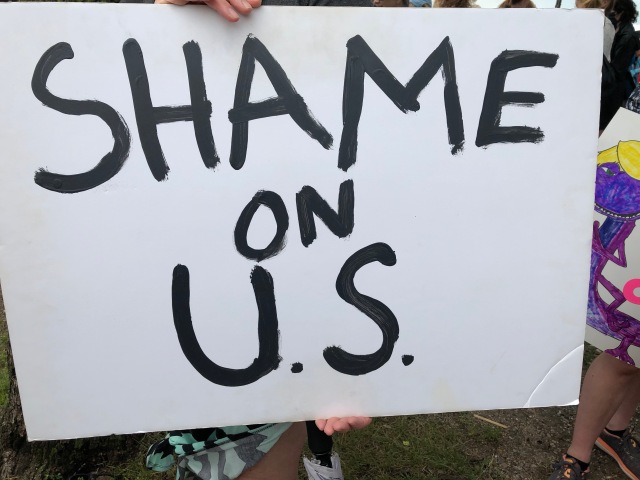 If you want to know how the El Paso massacre and the hate speech spewing from Trump’s Washington and his thousands of Facebook ads targeting immigrants affects U.S. citizens and immigrants, check out journalist Aura Bogado’s Twitter account. Yesterday, she asked: “Latinxs: how do you feel in public right now? What do you think about? Is there anything you’ve visibly or verbally changed, and if so, why?” The answers are still pouring in:

“The immigration narrative in this country has traditionally distinguished between people in the country illegally (bad) and people of the same ethnicity or background who immigrate legally or were born here (good). But one consequence of the heinous, racist, cowardly shooting targeting Mexicans and immigrants in the majority-Hispanic border town of El Paso Saturday is how it burst the bubble anyone may still be trying to live in—that this isn’t ultimately about white supremacists doing what it takes, including brutal violence, to stop the country from changing….

Vox traces the history of anti-immigrant and racist terrorism in the United States. It is long. It is ugly. It is accelerating right now:

“In the years after the Civil War, the Ku Klux Klan and other terrorist groups launched a wave of killings aimed at intimidating newly freed black people and restoring the antebellum racial order. Around the same time, an increase in immigration from East Asia and Mexico in the late 19th and early 20th centuries led to a wave of lynchings and mob violence targeting migrants, including large-scale race riots in Los Angeles in 1871 and in El Paso in 1916….

“Looking at the attacks as discrete events is a mistake, one akin to treating every lynching or anti-Chinese riot as a separate and disconnected incident. The overarching goal, the thing these attacks have in common and that connects them to a legacy of racial violence in America, is the aim of creating a climate of fear and anger — one in which minority groups are scared and more whites are won over to the racist cause.”

Do not let this continue. Call out racist and anti-immigrant hate speech. Does it make your friends and family uncomfortable? Go back and read the responses at the beginning of this post. Think about the difference between being uncomfortable talking about racism and the daily experience of feeling fear and terror for your children, parents, yourself.

From a letter in the Washington Post cosigned by 39 Latino leaders:

“Domestic violent extremism perpetuated by white nationalists affects Americans from all backgrounds. On Saturday, it was a Latino community; not long ago it was a Jewish congregation worshiping at a synagogue in Pittsburgh. Muslims at a mosque in California. African Americans at Bible study in Charleston, S.C. Our gun violence epidemic is further fueling hate crimes.”