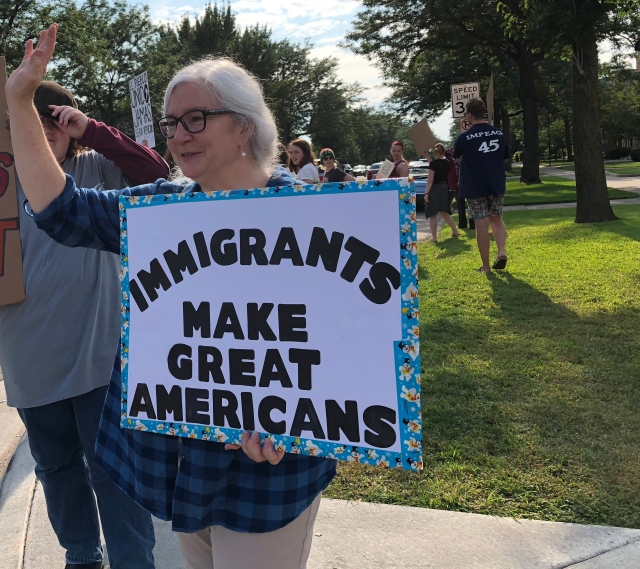 The Trump administration immigration policies are based on fear and weakness. They say we cannot afford to welcome immigrants, that we cannot integrate them in our society, that we must be fearful and hide behind walls.

Imagine instead an immigration policy based on strength and prosperity. This country is not weak and we need not be fearful.

An immigration policy based on strength and generosity would welcome asylum seekers from Central America. Imagine an asylum policy that says: “We welcome you. You are right—this country offers a haven to people fleeing violence and war and persecution. We offer you protection and a chance to build a new life. We welcome your passion for freedom and democracy.”

An immigration policy based on economic prosperity would welcome economic immigrants and reunited families and skilled workers from around the world. Imagine an immigration policy that says: “We need you. We need your energy and imagination and your willingness to work hard for your family and to build a home here. We welcome the contributions you can make to our economy and culture.”

As we resist the negativity and lawlessness of the present regime, we must not lose sight of the vision that we are working toward.

And now—back to today’s immigration headlines.

The Trump shutdown has further slowed immigration courts, with only detainees getting hearings and all other cases postponed indefinitely.

“The immigration courts are already massively jammed: The backlog is now 1.1 million cases. That means in the 11 days of the shutdown so far, thousands of cases have already been postponed.

“Technically, those cases will be rescheduled for three or four years from now. In fact, the backlog has reached such gargantuan proportions that judges are already double- and triple-booking future court dates, like an airline overbooking flights, meaning that many cases on the docket will inevitably be postponed repeatedly. “

As the number of unauthorized border crossings and unauthorized immigrants in the United States remain at the lowest levels in decades, the numbers of asylum seekers and other immigrants from Central America continue to increase. The Trump administration’s response is punitive: tear gas (in December and again on January 1), detention centers, and refusal of the right, established by U.S. law, to ask for asylum.

With detention centers filling up, just before Christmas, Customs and Border Protection (CBP) began releasing hundreds of migrants at bus stations, with no money, food, or way to contact relatives.

The private, for-profit companies that run the largest immigration detention centers are making billions of dollars from federal government contracts, and then squeezing more money out of the immigrants they detain through coerced labor at pennies per hour. Recently published videos show pushing, shoving, and physical abuse of children by detention center staff.

Further narrowing the door for asylum seekers, the Trump administration has imposed new policies, many of which eventually are struck down by courts. Both asylum hearings and court challenges to new policies take time. A federal judge recently ordered the release of an asylum seeker who had been imprisoned for years without a hearing, his case delayed over and over again.

Not everyone survives. The Washington Post traced Ronald Acevedo’s path through the immigration system as he unsuccessfully sought asylum, and eventually was murdered in El Salvador five days after being deported back to the country he had fled.

Despite Tijuana’s dangers, the administration plans to keep thousands of asylum seekers there, ignoring the clear mandate of U.S. law that they be allowed to enter and pursue their claims here.

“Disaster is the only word that comes to me,” said Pat Murphy, a Catholic priest who runs Casa del Migrante, a large shelter in Tijuana. “We are already living in such a tenuous situation now.”…

“Mexico is already struggling to cope with a 1,000-percent increase in the number of Central Americans who have sought asylum in this country in the past four years. And the government has slashed the budgets for its migration and refugee agencies for 2019 as part of an austerity plan carried out by the new president, Andrés Manuel López Obrador.

“We have nothing, no program, no fund, no support, nothing to receive people who are sent back from the United States,” said María Dolores París Pombo, a sociologist at the Colegio de la Frontera Norte in Tijuana who specializes in immigration.”

Racist, fear-based immigration policies weaken rather than protect the United States. We need policies based on our strength and on our commitment to offering protection rather than punishment to those who arrive seeking safety.That’s a message to send to Congress tomorrow, as it convenes for 2019.