“A mass deportation bill” in DC, mass arrests in Los Angeles, and more 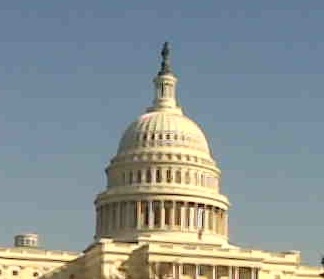 First, the Senate was going to debate the future of Dreamers from February 12 to March 5, though it would be in recess for a large part of that time. Then majority leader Mitch McConnell restricted the debate to one week, which was actually three days—Tuesday, Wednesday, and Thursday—and opened with a bill attacking sanctuary jurisdictions rather than legalization for Dreamers. Late Wednesday, a new “Common Sense Coalition” proposed a bill called “centrist” and “compromise.”

No way, tweeted Dreamers in Make the Road NY: “Make no mistake: this is a mass deportation bill that the immigrant community categorically rejects.”

In exchange for a 10-12 year path to citizenship for 1.8 million Dreamers, the bill would give Trump $25 billion for his wall and would bar any kind of temporary or permanent residence for Dreamers’ parents.

“Well, “centrist” is one word for a bill that protects Dreamers by selling out their parents; one can think of other descriptors,” said Slate’s report on the proposal. More in articles below, along with the ongoing ICE sweep in Los Angeles, and reporting on more misery for asylum seekers and unaccompanied minors.

Can a moderate immigration deal squeeze through the Senate? (Slate, 2/14/18)

“Well, “centrist” is one word for a bill that protects Dreamers by selling out their parents; one can think of other descriptors. What was once a tough pill for a lot of Republicans will now become a tough pill for many Democrats.

“Going through our caucus, there are parts of this that are very hard for some of my colleagues,” Durbin said. Specifically: “Parents and the wall.” There are not 49 Democratic votes for this yet.” https://slate.com/news-and-politics/2018/02/senate-moderates-reach-immigration-deal.html

Senators Strike Bipartisan Deal on Immigration Despite Veto Threat (2/14/18) The veto threat may be the main thing making this bill look good.

“The bipartisan measure, sponsored by eight Democrats, eight Republicans and one independent, would appropriate $25 billion for border security, including construction of the president’s proposed wall at the Mexican border, over a 10-year period — not immediately, as Mr. Trump demands.

“It would also offer an eventual path to citizenship, over 10 to 12 years, for 1.8 million of the young undocumented immigrants, but would preclude them from sponsoring their parents to become citizens. It would make no changes to the diversity visa lottery system, which Mr. Trump wants to end.”

“There were also qualms among Democrats. The party’s No. 2 Senate leader, Richard Durbin of Illinois, said some Democrats had “serious issues” with parts of the plan. Those concerns focused on its spending for Trump’s wall and its bar against Dreamers sponsoring their parents for legal residency.”

ICE launches new immigration sweeps in L.A. area; at least 100 detained so far (Los Angeles Times, 2/14/18) ICE says that it will conduct sweeps in “uncooperative jurisdictions” and will not say how long this sweep will continue.  http://www.latimes.com/local/california/la-me-ice-raids-20180213-story.html

“I have clients who have not been able to see their children grow up outside of a computer screen,” said Caitlin Steinke, an asylum lawyer based in New York City. “I cannot give them a sense of how many more years of their children’s lives they’re going to miss out on, and that makes me feel so helpless.”

Now the Trump administration has made it all worse:

“U.S. Citizen and Immigration Services announced last month that, as of January 29, it is scheduling more recent asylum applications ahead of older ones that have been lagging in a yearslong backlog. The agency switched to a “last in, first out” approach after three years of prioritizing the interviews of older applicants. Now, asylum-seekers like Koudjo will be bumped back to the end of the line.

“The impact of the decision is widespread, affecting not only the hundreds of thousands of backlogged asylum-seekers, but also the family members many of them leave behind — often in dangerous conditions.”

How the Trump administration is rewriting the rules for unaccompanied minors (Frontline, 2/13/18) The administration has limited legal representation, told judges to re-evaluate UAC status, and proposed eliminating protections for children from Central America.

“Under current law, when a child from Central America is caught crossing into the U.S. without documents, CBP will designate him or her as an “unaccompanied alien child,” or UAC, if they are under 18 and are not accompanied or met at the border by a parent or guardian.

“These minors are given protections to ensure they can’t be immediately returned to their home countries without first having the chance to make their case before a judge. They also have special opportunities to pursue their asylum claims.”

“I’ll fast forward the story but they were on food stamps and worked multiple jobs at a time. We started in a house in south Minneapolis as renters, bought a house in north Minneapolis and by the time I was starting eighth grade, they built a brand new home in Eden Prairie. My dad used his strong technical skills and moved up in his company to eventually manage the plant. He started as an entry level assembler, a job he held while washing dishes at night.

“This story provides context as we all have a history. We all have so many things that have shaped us. Without my parents’ experience, my story would be forever changed. Nothing in my life can be separated from their immigrant story. Their immigrant story is my story.”

Refugee shared background of Hmong experience (Hutchinson Leader, 2//18) He spoke as part of Hutchinson’s One Book, One Community program, now reading Kao Kalia Yang’s “The Song Poet: A Memoir of My Father”

“Lee was 15 years old when he arrived in Minnesota in November 1984. His trip had taken nine years. It started at his home — a rice and corn farm in a rural mountain village of Laos. His uncle served with Gen. Van Pao and followed him to the United States.

“He was originally one of 13 children in his family, but five died from disease while still in Laos.”

“The top attorney for U.S. Immigration and Customs Enforcement in Seattle is accused of stealing immigrants’ identities in an attempt to defraud several credit card companies.”