Keeping out refugees and other immigration news – September 29, 2017 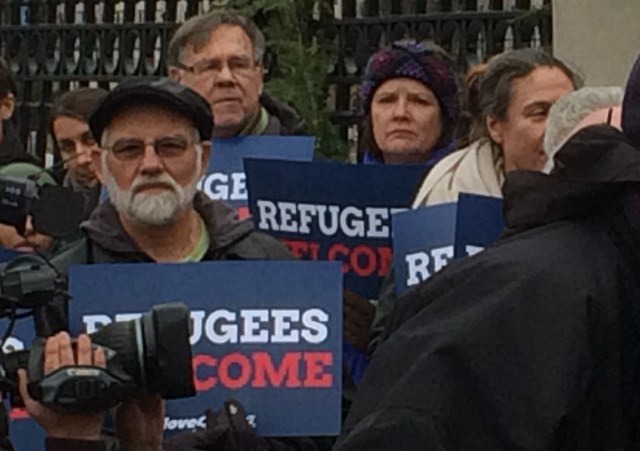 Trump announced that the number of refugees admitted in 2018 will be capped at 45,000. That’s the lowest number since the Refugee Act of 1980 was enacted, and less than half the number set by the Obama administration last year. The lowest number ever set by a president was 67,000, set by President Ronald Reagan in 1986.

“A new UN refugee agency report shows 65.3 million people forcibly displaced from their homes around the world. Of that number, 21.3 million are refugees and 3.2 million are seeking asylum. Another 40.8 million internally displaced persons live inside their home countries, but have been forced out of their homes.”

U.S. vetting of refugees continues to be lengthy and intense. As the libertarian CAto Institute reported in a lengthy analysis, refugees are not terrorists. The only people killed by refugees in the United States were three people killed by right-wing Cuban refugees back in the 1970s. As I wrote back in January:

In fact, says the report, “the chance of an American being murdered in a terrorist attack caused by a refugee is 1 in 3.64 billion per year.” Vox uses a more colorful example: you are more likely to die by having your clothing melt or catch on fire than you are to die from an immigrant terrorist attack.

Bluster and bigotry are easier than analyzing facts and advocating responsible policies. The president’s latest move against refugees is heartless and unconscionable. And not at all surprising.

NOTE TO READERS: I’m taking some vacation time next week and the following week – expect fewer, and shorter, posts as I focus on museums and autumn leaves.

“Resettlement is only an option in the most urgent refugee cases,” said Betsy Fisher, policy director for the International Refugee Assistance Project. “It’s hard to comprehend why the administration would move to limit resettlement, when the need is greater than ever. We are abandoning desperate people in life-or-death situations, including children with medical emergencies, US wartime allies, and survivors of torture.”…

“House Democrats John Conyers and Zoe Lofgren described the move as “an affront to the United States’ legacy as a protector of oppressed people”.

Trump plans to slash refugee admissions by more than half (Los Angeles Times, 9/27/17)

“After he took office in January, Trump suspended refugee admissions for 120 days and cut the cap to 50,000. But federal courts allowed authorities to continue admitting refugees who had family in the U.S., and about 52,000 were admitted.”

And in other news

From Kidney Disease to DACA, Uncertainty Besets Minnesota Brothers (Star Tribune, 9/28/17) For two Minnesota brothers, DACA is a matter of life and death.

“Carlos Villafan Priego’s predawn arrival at the hospital has a deceptively routine feel: stepping on the scales, the rundown of current medications, the blood pressure cuff above his forearm tattoo that reads “Familia.” But on the other side of a curtain, Jeremy Villafan Priego, Carlos’ younger brother, is preparing to give him his right kidney.”

“Supporters say Gabriel-Tomas stands out for how deeply enmeshed he is in his southern Minnesota community after almost 25 years here: He owns a home, pays taxes, volunteers at church and raises four U.S. citizen children.

“This month, Gabriel-Tomas’ attorney made a last-ditch argument he should stay because he could qualify for a path to citizenship under a proposal in Congress to help people who came illegally as children. The offices of Sens. Amy Klobuchar and Al Franken and Rep. Tim Walz took an interest in the case.

“It’s an all-star lineup of elected officialdom that are trying to help,” said John Keller, executive director at the St. Paul-based Immigrant Law Center of Minnesota….

“Mike Kuhle, the mayor of Worthington, called several congressional offices and the head of the local ICE office to argue he should be allowed to stay. …

“Congressional office representatives spoke with ICE officials about the case on Tuesday. Rod Hamilton, R-Mountain Lake, has urged his constituents to contact ICE on Gabriel-Tomas’ behalf.”

“U.S. Immigration and Customs Enforcement (ICE) Enforcement and Removal Operations (ERO) Fugitive Operations teams arrested 498 individuals from 42 countries for federal immigration violations in multiple cities across the U.S. during a four-day operation that ended Wednesday. Operation ‘Safe City’ focused on cities and regions where ICE deportation officers are denied access to jails and prisons to interview suspected immigration violators or jurisdictions where ICE detainers are not honored.”

“As I’ve stated many times, when our immigrant communities cannot trust law enforcement, they are less likely to want to work with them to fight crime,” [Philadelphia Mayor Jim] Kenney said in a statement. “Operation ‘Safe City’ does not make our city safer and further sows seeds of distrust between our police and immigrants.”…

“ICE’s goal is to build cooperative, respectful relationships with our law enforcement partners to help prevent dangerous criminal aliens from being released back onto the streets,” [ICE acting Director Tom] Homan said. “Non-cooperation policies severely undermine that effort at the expense of public safety.”

Immigrants held in remote ICE facilities struggle to find legal aid before they are deported (Los Angeles Times, 9/28/17) Distance is just the beginning of the difficulties.

“Judy London merges onto the freeway, heading northeast toward a high desert already baking under a recently risen sun. From West Los Angeles she faces a two-hour, 100-mile drive to the Adelanto Detention Facility to meet a client who is being deported. The commute time can double if rush-hour traffic is particularly bad.

“London arrives at the facility and walks up a concrete path flanked by gravel to the detention facility’s entrance. Once inside, rows of chairs and lockers greet her, as does a desk manned by a guard. She checks in but can’t meet her client yet – the facility is undergoing its daily head count and she has to wait until it’s finished.

“It can take another hour from this moment. London still has to be cleared through security and have a guard escort her client.”

“By presenting the travel ban as more evidence-based — and not prejudice-based, as its critics argue — the White House is hoping to protect it in the face of inevitable legal challenges….

“Prior versions of the ban didn’t do much to explain how countries can get off the list, fueling the argument it was an arbitrary order targeted at Muslims. With the new travel ban, the administration has been reluctant to specify exact steps countries can take to get off the list, other than generally making “improvements” in how they share information with the U.S.

“The perception of general improvement, the administration said, is what prompted it to remove Sudan from the list of targeted countries. Public Radio International reports another possible reason: The administration last week ended “protected status” for Sudanese nationals in the U.S., which had protected them from deportation. Refugee advocates suggest Sudan got off the list under pressure to accept an influx of deported Sudanese from the U.S….

“Family reunification for many Somalis, Allen says, “looks like it’s no longer an option unless there’s an injunction on this ban. For many of the families here from Somalia originally, they’re having hopes about getting family members to safety dashed by this order that’s coming out.”

“The legislation has little chance of reaching the president’s desk — at least on its own — as Democratic leaders have drawn a clear line opposing any legislation that includes funding for new wall construction. While House Republicans can likely pass the bill through the lower chamber, Senate GOP leaders will have a much tougher time finding the eight Democratic or independent supporters they’d need to kill a filibuster.”