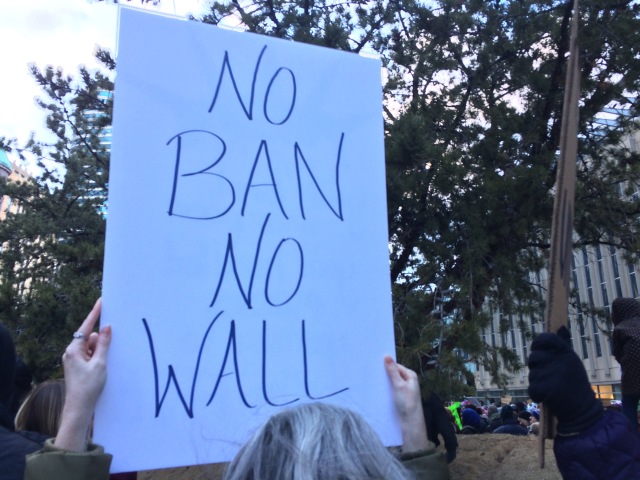 The Trump has spoken: Under the refugee ban that went into effect at 5 p.m. on June 29, your mother is a ‘close’ family member, but your grandmother is not. Your sister is ‘close,’ but her husband is not.Your adult son is ‘close,’ but your fiancee is not. Or maybe she is: according to some news reports, the ban was changed to include fiances/fiancees at the last minute before going into effect at 5 p.m. Thursday. The Supreme Court did not require any family relationship – only a “bona fide connection” to someone in the United States.

The administration does not consider refugees’ relationship with a resettlement organization as a bona fide connection. Resettlement agencies disagree, particularly since their relationship with refugees is established only after the prospective refugee undergoes a two-year-plus vetting process.

Among the groups who will be barred from the United States are orphan children who are refugees.

NOTE: I’m taking a break from Immigration News daily posts for the Fourth of July holiday weekend. The next regular news summary will be on Wednesday, July 5.

Refugee Advocates Prepare for New Challenges Under Travel Ban (NPR, 6/29/17) One example: a single mom from the Democratic Republic of Congo scheduled for resettlement in Charleston, SC. She arrived at the airport within the past 48 hours, having just given birth to her baby, and was not allowed to travel because the child must go through medical screening. She will be barred by the new ban because the medical screening can’t happen before July 6. And after the 90 day ban expires, she will have to go through medical exams and security checks all over again, because the ones she has already done will be out of date.

“Most of the same criteria would be applied to refugee admissions too. But crucially, an administration official noted, a refugee’s relationship with their resettlement agency “is not sufficient in and of itself to establish a bona fide relationship”. Advocates were quick to point out that many refugees entering the US have only got relationships with their non-government resettlement agencies before they arrive….

“This guidance shows a cruel indifference to families, some already torn apart by war and horrifying levels of violence,” said Naureen Shah, Amnesty International USA’s senior director of campaigns in a statement.

“This reported guidance would slam the door shut on so many who have waited for months or years to be reunited with their families,” added Karen Tumlin, legal director at the National Immigration Law Center.

As travel ban goes into effect, debate ensues over who counts as ‘close’ family and Hawaii files a court challenge (Los Angeles Times, 6/29/17)

“Late Thursday, the state of Hawaii filed a motion in Honolulu’s federal district court asking a judge who previously ruled against the travel ban to clarify whether the government’s list of unqualified relatives violates the Supreme Court’s order.

“Government officials said they based their interpretation on the 1965 Immigration and Nationality Act….

“Peter Spiro, a law professor at Temple University, said that “the administration’s definition of family is all over the place.”

“He pointed out that the immigration act doesn’t allow preferential treatment for mothers- and fathers-in-law — who were included in the administration’s definition of close relatives — but does give preference to fiances and fiancees — who were initially left off the list and then added in the final hour before the ban took effect.”

“Ali, who is a Muslim, had opposed strict religious law in his own country, and was apparently tortured and imprisoned for his belief. Seven years ago, he was granted asylum.

“Ali said this latest travel ban, despite its revisions, is still a bad idea.

“The United States is falling into the same trap that Sudan did. When you start targeting people based on their religion, everyone loses,” he said.

The brief directive strikes part of a 2012 order signed by former President Obama that instructed the State Department to “ensure that 80 percent of nonimmigrant visa applicants are interviewed within three weeks of receipt of application….

“In a March diplomatic cable first reported by Reuters, Secretary of State Rex Tillerson said the number of visa interviews conducted by each consular official should be limited to a maximum of 120 per day. Tillerson acknowledged the new rule “may cause interview appointment backlogs to rise.”

And in other immigration news

“Luciano Mejia Morales, who was part of a recent campaign to unionize janitors, was detained by immigration authorities right after his release from Hennepin County jail on $3,000 bail following a Richfield traffic stop this month.

“His supporters argue his Central American homeland is unsafe for a U.S. deportee, particularly one who has been active in labor organizing.”

Syrian doctor hit by Trump travel ban takes up studies in Canada instead (The Guardian, 6/29/17) He was outside the U.S. on an aid mission in Turkey when the first travel ban was imposed, and his visa was revoked. That meant separation from his pregnant wife, a doctor in Rhode Island. They decided to go to Canada.

“While he might have been able to get student visa under the scaled-back ban, Almilaji said Canada was a safer bet that would allow him to continue to travel to Turkey to carry out humanitarian work.

“This chance to be in Canada, it will allow me to improve my knowledge and keep working for my country – Syria – by going back and forth to Turkey,” he said.

“An estimated 10,000 people are believed to have attempted the journey from North Africa in the past four days.

“More than 73,000 migrants have landed in Italy this year, an increase of 14% on the same period last year.”

“Three lawmakers are pressing President Trump and the Pentagon to intervene on a proposal to cancel enlistment contracts for 1,000 immigrant military recruits in a bid to shield them from deportation.

“Rep. Betty McCollum (D-Minn.) will propose an amendment to constrain the Pentagon from eliminating those contracts in an appropriations committee markup Thursday…

“For the Defense Department to even consider terminating these contracts is a betrayal of people who want to serve the United States,” McCollum told The Post on Wednesday. “My amendment is a first step to holding the Pentagon accountable on its commitments to foreign nationals who want to fill critical military roles.”

“I’m going to beat them all up. You’ll be great again.