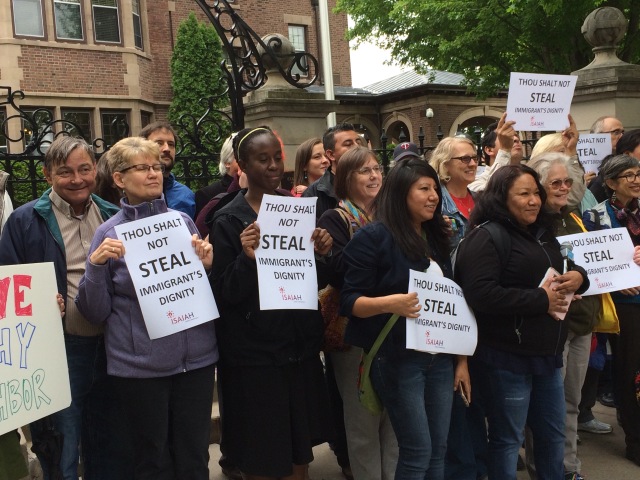 Protesters at governor’s official residence on May 23

Protesters gathered at the governor’s official residence on Summit Avenue at 3 p.m. on May 23 to demand that the governor veto the public safety bill. Later, some marched to the State Capitol and the governor’s office there. Navigate MN said in a Facebook post that they intend a “peaceful occupation” until the governor “vetoes the HF470 bill that includes anti ruling and anti immigrant language!.

“The Public Safety Department would be prohibited from using its rulemaking authority to issue driver’s licenses for undocumented residents.

“This is in place clearly — clearly — because there’s a mean spirit behind this,” said Rep. Raymond Dehn (DFL-Mpls). Rep. Karen Clark (DFL-Mpls) said the provision “smacks of injustice and, I’m afraid, it also smacks of racism.”

“[M]ost of the debate was about a single policy provision in the bill: a rulemaking limitation for the Department of Public Safety to prevent any future issuing of drivers’ licenses to unauthorized immigrants.

“This bill doesn’t create a path for legal licenses. That door is already shut. This language not only shuts the door, it puts a padlock on it.”

A Tale of Twin Cities, and Somalis being Trumped (MinnPost, 5/23/17) Two professors, one from Sweden and one from Connecticut, have studied Somali communities in both countries for more than a decade. Their conclusion: Minnesota Somalis are highly entrepreneurial, employed at higher rates, and vastly more successful than their counterparts in Sweden or anywhere else in Europe. But Trump changed the climate:

“For years Somali entrepreneurs have reiterated this saying: “Nobody wants to crush your dream.” Well, things have changed. Now there is someone who wants to crush their dreams. Will economic rationality trump Trump’s prejudice or will Trump’s prejudice trump economic rationality? Will perhaps “a great wall,” at least of a mental kind, be erected around this community? We urge the president and other leaders to learn from the entrepreneurial experience, success, and drive among Somali-Americans. If we focus on these important achievements and the policies that have helped shaped their successes, perhaps we can create models that can be preserved in Minnesota and adapted in European countries such as Sweden.”

A family shares story of mother’s deportation and what it took to get back (Catholic Hotdish, 5/18/17) In 2005, her children were U.S. citizens, ages 14, 12, and 7. She was deported to Honduras, and struggled to get back to her children. Now they tell their stories.

“We were all sleeping. It was like six in the morning. You could hear someone yelling. They came in, took my mom, took several other people. I didn’t know much of immigration at that stage in life. Never knew that they would come and do that to a person… We thought somebody did something wrong and that’s why they were there. We thought they would let my mom go eventually, but that wasn’t the case.” …

She was held for ransom in Mexico and walked two days across the Arizona desert, guided by a coyote and relying on crackers, tuna and two gallons of water to survive. They passed the bodies of immigrants who had died in the desert.  But staying with the bodies, waiting for help, meant risking dying themselves.

Finally, 16 months after she left, Lorena arrived one cold winter morning at her friend’s house. There were tears and celebration, but also damage that could not be undone.

Minnesota got a not-so-honorable mention in the Washington Post: Are you here illegally? Minneapolis probes video of transit officer checking rider’s immigration status. Back in St. Paul, the Pioneer Press reported that Metro Transit’s police chief wants to be crystal-clear: His officers aren’t immigration agents:

“[Chief John Harrington] and others have been carrying around thick stacks of Spanish-language brochures that read, in part, Los Policías de Tránsito no tienen derecho y no pueden preguntarle a usted sobre su estado migratorio (“The transit police has no right to and can’t ask you about your immigration status.”) ….

The reason “we have this policy is good community policing,” he said. “It is counterproductive to our goal of keeping the community safe. All individuals must feel secure regardless of immigration status.”

Australian Molly Hill was trying to visit her U.S. boyfriend. When she landed in Hawaii, she ran into U.S. immigration authorities, who read her diary and decided she was planning to stay in the country – so they put her in prison overnight and then shipped her back to Australia (at her expense, of course.) She posted about it in Facebook, including details of the strip searches and the “regular” prison inmates she met during “a surreal few days that’s taken a big chunk of money, heartache and tears.”

Buzzfeed investigated, and published her story and a weirdly anonymous, but seemingly-official response, which defended the actions of the immigration authorities.

And in other immigration news

What right-wing populism? Polls reveal that it’s liberalism that’s surging. (Vox, 5/22/17) Polling shows that on many issues, Americans are falling farther and farther away from Trump-ism. Immigration is a leading example, as measured in the NBC/Wall Street Journal poll that has been asking since 2005 whether immigration helps America more than it hurts.

“In fact, as the chart below indicates, positive feelings about immigration have generally been rising since early 2016, including through Trump’s election and beyond. And if you go back to 2005, when the question was first asked by NBC/WSJ, positive feelings today are way higher than they were back then.”

Ray Beltran puts himself in position for green card with spectacular KO (USA Today, 5/21/17) Getting an EB-1 visa requires “exceptional ability” in a field such as sports, acting, music, or arts and sciences.

“Ray Beltran put himself in line to realize both of his dreams — a world title shot and a new life — with a spectacular knockout victory of Jonathan Maicelo on Saturday night.

“Beltran (33-7-1) had been told by immigration experts ahead of the bout that climbing into mandatory challenger position for the IBF lightweight title would likely prove to be the decisive factor in his long fight to become a green card holder after entering the United States as an illegal immigrant from Mexico as a teenager.”