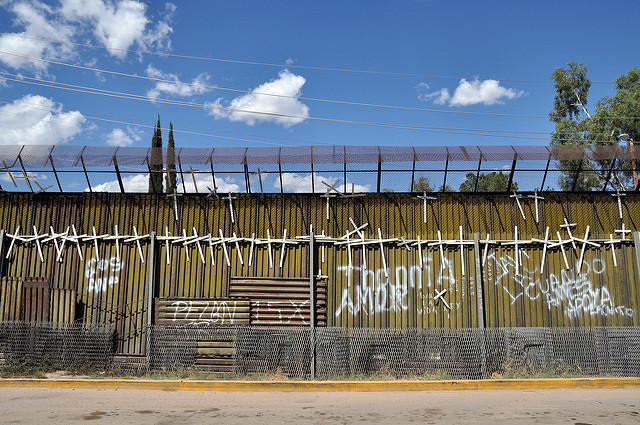 White crosses with the names of those who have died crossing the US border adorn the Mexican side of the wall in Heroica Nogales, Mexico. Photo by Jonathan McIntosh, published under Creative Commons license

The border wall should be a non-issue by now, with immigration officials, Republicans on the border, and just about every person with any background information agreeing that it’s a stupid idea. Everybody, that is, except the president. With a government shutdown coming at the end of the month, Congress and the administration are scrambling to agree on some kind of spending bill. Democrats want the bill to include funding for the cost-sharing program that helps pay healthcare costs for low-income people, which leads to Trump’s latest big idea: holding health care hostage.

“We’d offer them $1 of CSR payments for $1 of wall payments. Right now that’s the offer that we’ve given to our Democratic colleagues,” Mulvaney said during a Bloomberg Live interview, referring to the insurance company reimbursements known as cost-sharing reduction (CSR)….

“The White House gambit to hold hostage health care for millions of Americans, in order to force American taxpayers to foot the bill for a wall that the President said would be paid for by Mexico is a complete nonstarter,” said Matt House, a spokesman for Schumer.”

Meanwhile, here’s the line-up against the wall:

“Sen. John Cornyn (R-Texas), the number-two Republican in the Senate, has said “there’s parts of our border which it makes no sense,” and that when President Trump talks about a wall, “he’s speaking metaphorically.”

“Of nine House districts on the southwest border, three are controlled by Republicans, all of whom have voiced some level of opposition to a border wall.”

“Despite President Trump’s request for more than $1 billion to fund the Mexican border wall this year, GOP leaders are expected to exclude the money in the spending bill being prepared to keep the government open beyond April 28.

“Speaker Paul Ryan (R-Wis.) says the choice is pragmatic and the money will come later.”

Attorney General Sessions on March 27 likewise tried to paint sanctuary policies as defying federal law. He said that the DOJ Inspector General previously “found that these policies … violate federal law.” PolitiFact rightly rated this claim “mostly false” after consulting with immigration law experts and reviewing the Inspector General’s report [PDF], which was fairly explicit in not reaching the conclusion that any particular policy violated the law.”

“Gardner-Webb honor student Sthefany Flores learned Tuesday night that she no longer faces deportation. Flores, 20, had been notified that she had to appear in Charlotte on Wednesday with her bags packed and her Honduran passport. Now, Flores appears to have been the victim of a government mix-up”

“A US judge labelled “Mexican” by President Donald Trump last year is to hear a high-profile deportation case.

“The case involves Juan Manuel Montes, who says he was deported from California in February, though he has lived in the US since he was a child.”

“The Department of Homeland Security reversed itself Wednesday saying that a young man, identified by USA TODAY as the first DREAMer to be deported by the Trump administration, had valid protective status despite its earlier claim.”

And in other news:

“That’s the idea behind their new project, “Resistance Through Storytelling.” Klein, Fine, and filmmaker Hunter Johnson plan to create short documentaries about five different immigrant or refugee families across the United States, centered around a cross-generational family dinner where each member discusses their immigration experience. The team will then distribute the films through Facebook’s hyper-stratified targeting options, aiming for moderate voters in swing states—selecting, say, people who live in Wisconsin and like the Packers—to combat what Klein calls the “anti-immigration echo chamber” in some newsfeeds.”

“There’s a lot of fear in the community,” Pray says. “Usually people who’d been here a long time, they decided to get their citizenship when they had some relative they wanted to bring over.

“Among the major differences is whether a current rule against issuing driver’s licenses to undocumented residents should be put into law. The House says yes, but in the Senate version such a ban would apply only to Real ID-compliant identification. “

Opinion: California chief judge: The courthhouse is not the place for immigration enforcement (Washington Post, 4/21/17)

“It is my concern for the trust and confidence in our state court system that prompted me last month to ask Attorney General Jeff Sessions and Homeland Security Secretary John F. Kelly not to make immigration arrests at or near courthouses. Our state courts are on the front line of justice in the United States: We handle more than 90 percent of the nation’s case filings each year. I am asking that immigration agents treat courthouses as “sensitive” areas — as they do schools, churches and hospitals.”

“More than 90% of removal proceedings initiated in the first two months of the Trump administration have been against people who have committed no crime at all other than to be living in the country without permission. Early figures on deportation arrests show that the number of people with no criminal record who have been picked up has doubled, dragging people who were previously considered harmless into the deportation net.”

“There are now 250 immigration judges, and a backlog of 542,000 cases in immigration courts.
“Moreover, the latest report from the inspector general’s office at Homeland Security said ICE agents, who are supposed to identify, detain and deport people in the country illegally, are ill-equipped to monitor those on their caseloads.”

“This administration’s backwards emphasis on criminalizing immigrant communities, targeting religious groups, militarizing border communities, gutting vital government programs, and undermining protections for our environment that have existed for a generation has led to widespread fear and instability across our nation,” said NHLA member Amy Hinojosa, who is also CEO of MANA, a national Latina organization, in a statement.

“Whenever we see immigration people or police,” he said, “people are scared. It’s putting too much pressure on the people. They don’t want to send their children to school. Even people who come to get their car fixed don’t want to come if they don’t have papers.”

“Carmelo Zuccaro told La Stampa (in Italian) phone calls were being made from Libya to rescue vessels.

“Organisations involved in rescue operations have rejected accusations of collusion, saying their only concern is to save lives.”

News Day, written by Mary Turck, analyzes, summarizes, links to, and comments on reports from news media around the world, with particular attention to immigration, education, and journalism. Fragments, also written by Mary Turck, has fiction, poetry and some creative non-fiction. Mary Turck edited TC Daily Planet, www.tcdailyplanet.net, from 2007-2014, and edited the award-winning Connection to the Americas and AMERICAS.ORG, in its pre-2008 version. She is also a recovering attorney and the author of many books for young people (and a few for adults), mostly focusing on historical and social issues.
View all posts by Mary Turck →
This entry was posted in Uncategorized and tagged border wall, DACA, DREAMers, immigration. Bookmark the permalink.